Personalization and incentives are key to winning the hearts of consumers.

A report by OrderDynamics has likened the challenges of ecommerce to those of modern dating. While repeat customers are crucial for generating healthy revenues, retailers often find themselves fishing for a second "date." As with dating, the keys to success for brands is to forge meaningful connections (enabling effective personalization), to be themselves, and to play their cards right with the nature and frequency of their communications to give themselves the best chance of winning consumers' hearts.

“Retailing today is a lot like dating.” That’s according to a report by OrderDynamics. Certainly there are some striking similarities. After all, the first challenge in both retailing and dating is that “first you have to attract customers. Once they’ve made an initial purchase (or committed to a first date) you need to convince them to make subsequent purchases (or go out with you again).”

The problem for both retailers and perpetual singletons is often the same: securing that second “date.” For retailers, frequent, repeat customers are a huge part of running a successful business.

Research by OrderDynamics revealed that “customer spend usually increases over the course of [a brand] relationship,” and “an analysis of the purchasing patterns of more than 4 million consumers across a sample of 20 retailers revealed a positive correlation between the number of purchases, [and] Average Order Value (AOV)”. For example, one retailer reported that the fifth purchase from loyal customers is, on average, 30 percent higher than purchases from new customers.

Wooing Customers: The 4 Types Of Retailers

OrderDynamics identified four different kinds of retailers, based on how often they followup with consumers who signed up for a mailing list:

Are retailers advances going unnoticed? Seventy-four percent of shoppers said they read emails from retailers. Of those, how often do shoppers read retailer emails?

The key to improving these open rates is greater personalization. After all, there’s no bigger turn off than a date who doesn’t seem to listen or connected with things that are important or interesting to you. 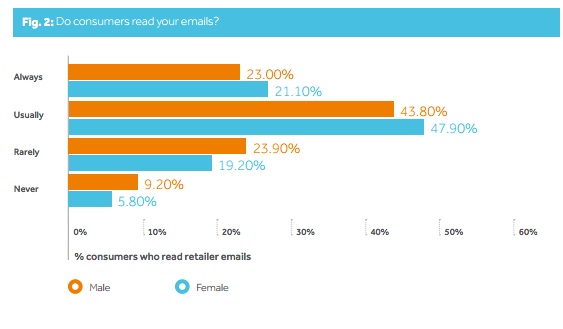 The impression it gives is a lack of listening skills on the part of the retailer. Most consumers now expect a level of personalization. Not giving consumers what they want is a definite turnoff.

Another area turning consumers off is when retailers aren’t themselves, and overcomplicate things by introducing third parties.

This is often a deal-breaker for consumers: 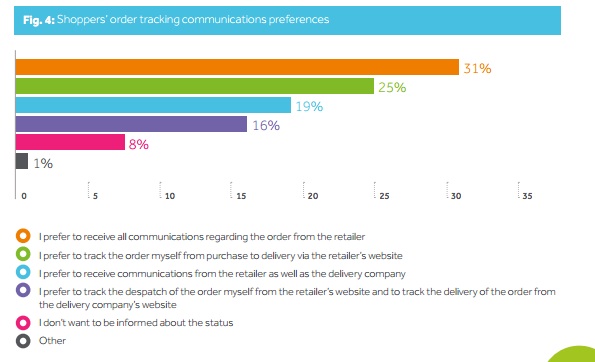 3. Take It To The Next Level

Some retailers play hard to get, but others wear their hearts on their sleeves. Many retailers were eager to take it to the next level with customers who had browsed the site or added items to a basket:

As dating can be, it’s often a game of frequency. 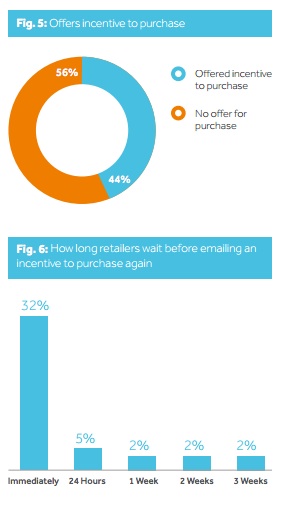 Why Long-Term Loyalty Is So Valuable

The ultimate reward for a retailer that manages to woo consumers is the long-term loyalty that encourages a brand-customer relationship to blossom. A Smarter Insights article recently summarized that winning this kind of loyalty requires personalization, rewards, and discounts.

Research quoted in the article and researched by Coniq backs up OrderDynamics findings. They found that consumers were two times more likely to return with a loyalty card. Loyalty habits showed that 80 percent of 1,000 customers would return if they were offered a loyalty scheme and 70 percent of your social followers expect rewards.

Retailers that listen to consumers and personalize their services, communications, and incentives will give themselves the best chance of winning the hearts of consumers.

What else can retailers do to give themselves the best chance of wooing customers?

The 500 leading retailers in mobile commerce will see sales of $83.78 billion by the end of 2014, according to a new forecast from Internet Retailer. Mobile sales will account for 21.2 percent of an estimated $394.71 billion in total web sales by retailers that make up Internet Retailer’s…

30% Of Shoppers Leave Ecommerce Sites In Less Than 1 Minute

Ecommerce sites only have seconds to capture and engage their consumers and move them further down the conversion path.

What Loyalty Marketers Can Learn From Dating