Perhaps one of the key objectives for a lot of digital marketers and brands in the last few years has been in the continued improvement and optimization of the user experience. Image load time is one area that can easily be overlooked, but these days users expect fast speeds and quality images, as part of a responsive, and rewarding online experience. What are the implications for ecommerce sites who depend upon image loading speeds if their optimizations aren't up to scratch?

A new study from technology provider Radware has revealed the importance of optimizing images so that they render more quickly in a users’ browser, as a means of boosting the overall user experience of websites.

Recent case studies on this topic include Yahoo, which discovered that making pages 400 milliseconds faster resulted in a 9 percent traffic increase. Another study referenced in the report specified how online auto parts retailer AutoAnything experienced a 13 percent increase in sales, after managing to cut its page load times in half.

Until now, technological limitations have prevented a large scale analysis of user sentiment as affected by the effectiveness of image loading speeds. However, Radware’s study utilized sophisticated neuroscientific techniques that allowed them to “effectively evaluate emotions objectively, sensitively, and with meaningful granularity.”

Test participants were then evaluated on their response to three key image types: 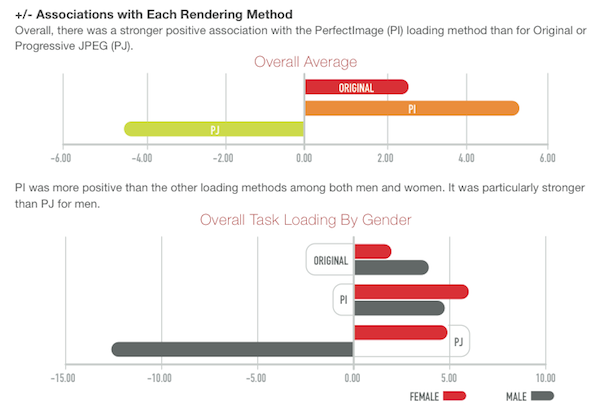 The report highlights in no uncertain terms that image quality and loading speeds have a pronounced effect on user happiness as they are browsing sites. The study itself has been somewhat groundbreaking in its insights, in that Radware’s advanced measurement procedures that have provided marketers with data on immediate user responses to the images they are viewing online.

A clear and stark takeaway from the report must be the emphatic results and negative sentiment that surrounds progressive images – those that load gradually, and provide the user with something to look at before the full image can load. Fortunately, many brands seem to already be acutely aware of this, with now only 5 to 7 percent of web pages using progressive JPEGs.

As digital becomes even more visually driven, having the most effective image compression methods and delivery solutions are bound to be a particular consideration for ecommerce retailers, media publishers, but also for any consumer facing brands operating online.

You can download Radware's full Progressive Image Rendering report here. Have something to say about image optimization and how consumers respond? Comment below or Tweet us @momentologyNews.

ESPN has announced a major site redesign to launch next spring (just in time for the site’s 20th anniversary), marking the first reinvention of the popular online sports news site in five years. ESPN is letting users who want to experience the new site design sign up to the public beta,…

In an effort keep its male users active and attract more men, Pinterest has updated its search engine to show results just for guys.