Should search engines filter organic search results? What will be censored next?

If it isn't requests from the EUs controversial "right to be forgotten" ruling, then it's algorithm updates targeting content piracy. Last week we saw the latest Google update, which is designed to make it more difficult for sites infringing on copyright to be found in organic search results. As companies including Google continue to modify their product to stay within the law, the question is: are they losing their customer-centric focus?

Once upon a time, Google arguably displayed the best results for the user. But are we moving into a more censored environment?

What is next? Might search engines remove user-generated content (e.g., reviews that don’t portray a product, or brand in a favorable light) in the future?

Google updated its anti-piracy algorithm update on Oct. 21. The goal of the update is to make it harder for Google’s billions of users to find search listings for sites which are alleged to infringe copyrighted material. This update comes only weeks after Robert Thomson, chief executive of News Corp, publicly attacked Google, calling it “a platform for piracy” in a letter to the EU that demanded Google do more.

Google seems to be removing more content from organic search results. However, what effect will this have on users? Where will filtering search results end?

Google have been removing more links to copyrighted content from its search results over recent years, as detailed in their Transparency Report: 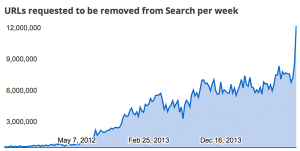 URLs removed from Google search results due to copyright

And in the case of copyrighted content, Google informs users when links have been removed. 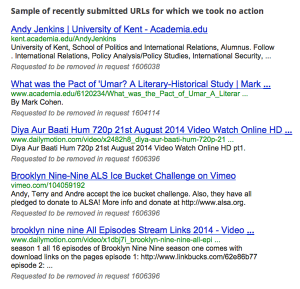 A Summer Of Landmark Legal Rulings

This latest Google anti-piracy update comes after a summer of controversy following the European Court of Justice ruling against Google, in a case brought by Mario González, for displaying links to information which infringed his privacy. There is certainly a growing trend of search engines being found accountable for the results they return to their users. Also more people seem prepared to take on the goliath that is Google.

There were even more landmark legal rulings against freedom of speech, and search engines in July. A French blogger was fined over a review which ranked too prominently in search results after a restaurant owner successfully argued it was hurting their business.

What Does This Mean For The Consumer?

It’s fair to say websites that infringe copyrighted material are a pretty clear-cut case, with regard to the law in most countries. As such, it’s doubtful that many people would object to Google’s piracy fight when filtering makes it harder for people to practice illegal activities.

However, what effect does this has on users finding the content? People always find a workaround to access torrents, for example, even it’s made a little harder. For every site that is blocked, another 10 are there ready to take its place.

Even going back to the days of Napster, the MP3 sharing peer-to-peer service, there were plenty of other technologies which facilitated the transfer of copyrighted material. The only difference being that they didn’t get the same media attention, mainly due to Napster’s size of 80 million registered users. So it comes as no surprise that Google is center of attention because of its dominant market share.

What Will Be Filtered Next?

Right now, Google only filters organic search results for individuals who are able to demonstrate that their privacy needs protection, and when copyright-owners expose websites that are hosting pirated content.

One of the things I love, respect, and value the most about the Internet is the freedom of speech. We’ve already seen a shift in Google being more accountable for the links it displays to users, even though it doesn’t create, or host the content.

What’s next for censorship? Will companies start to request bad reviews of their products, or services also be removed from Google, and maybe even websites talking about them?

Customer reviews are very influential to consumers during the purchasing process. Negative reviews are as important, if not more important, than positive ones.

However, what if companies are able to request that unfavorable reviews be removed from search engines in the future? How would consumers find these less favorable reviews and make an informed decision?

If users lose trust in Google’s ability to return accurate, unbiased search results, both Google and its loyal users may ultimately lose.

Where will the censoring of search results end? Share your thoughts in the comments.

Specialising in search, Martin has worked as an SEO Consultant at some of the biggest SEO agencies in the UK, helping big brands achieve success online through sustainable organic search. He has a passion for helping in people in difficulty suffering from Google penalties, and has removed over 130 Google manual actions for link spam to date. When he isn’t glued to his smart phone, he enjoys traveling, music and cats.

Google Penguin 3.0 is the latest attempt by Google to clean up its organic search results. Could the update threaten your brand’s search visibility?

Plenty of fitness brands are working (out) hard to hone digital content that appeals to as many consumers with weight loss resolutions as possible.