62% of consumers considering buying a tablet say consumer reviews help them make their decision to purchase.

Chadwick Martin Bailey, a market research and consulting firm, surveyed 2,000 consumers who had recently purchased tablets, in order to find out what had influenced their purchasing decisions. During the course of the purchase journey:

The primary trigger for consumers to purchase a new tablet was due to technical issues with their own devices, with 51 percent of consumers purchasing a handheld device after experiencing current “tablet or PC issues.” Sixteen percent purchased a new tablet because of “lifestyle” changes.

The majority of research during purchase journeys was conducted on mobile devices, with two-thirds percent of consumers using their smartphones to seek out information on products, however just 8 percent of users went on to complete purchases via mobile.

Chris Neal, VP of the Technology and Telecom Practice at Chadwick Martin Bailey described how consumers were conducting their research:

“We’re seeing that smartphones, in particular, are indeed playing an increasingly important role in the consumer purchase journey for tablets - including when people are inside a physical retail store. Most of this activity is still happening on the mobile web, rather than within any specific mobile application, which has implications for media spending optimization, digital creative, and retail channel management.”

In a telling statistic, approximately a quarter of tablet purchasers used a mobile device while in-store to compare prices, check consumer reviews, text a friend for advice, or pay with a mobile wallet. However, the same proportion of users sought out the advice of a sales associate while in-store.

The Influence Of Consumer Reviews 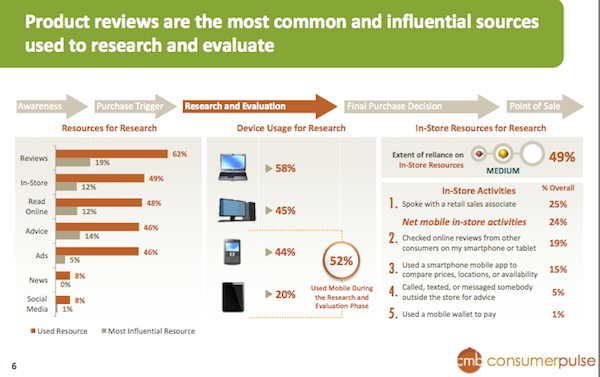 Social media, on the other hand, wasnt considered to be a useful resource by many consumers, with just 12 percent of respondents saying that they consulted social media portals during their purchase journeys.

In-store, price becomes a defining factor for purchase decisions, with 43 percent of consumers making a final transaction because the particular store they were in offered the best value for a product.

When it comes down to it, consumers now expect nothing less for the products they eventually resolve to buy.

Do you agree with the study's findings? Are consumer reviews also a crucial resource for your company? Let us know in the comments, or Tweet us @momentology News.

Pat is one of the founding writers of Momentology. He is passionate about storytelling, technology, and the future of digital marketing. He likes banoffee pie (with a dollop of marmalade), spiders (just give them a chance), and stories of the impending zombie apocalypse (get ready). He dislikes shopping and dental appointments...

A new survey from Johnson & Johnson partner site, BabyCenter, has revealed that nearly two-thirds of upper-income millennial moms acknowledge that they are influenced by online recommendations when purchasing baby products. BabyCenter’s study surveyed 905 new and soon-to-be moms in a…

Blogs Have A Huge Influence On Consumer Purchase Decisions

Consumers rely on blogs for unbiased opinions and expertise when considering purchases, making blogs an influential platform to reach consumers.