Brands must continue innovating if they want to ensure long-term loyalty and revenues.

App usage and revenues are growing to record-breaking levels on all the major mobile platforms. However, research has revealed telling sentiments from consumers who are beginning to use and purchase certain apps less, showing that brands need to ensure they aren't annoying consumers, and instead to deliver continued innovation with app products in order to win long-term loyalty.

One of the most significant pieces of marketing data to emerge in 2015 was that Apple’s App Store revenues rose a stunning 50 percent in 2014 alone, with end of year revenues topping $10 billion (to put this figure into context, total App Store earnings in the previous five years numbered $15 billion altogether). New Year’s Day 2015 incidentally, broke the record as the single biggest day ever in App Store sales history.

Put simply, the app market is booming not just in popularity, but in the number of apps that are winning revenues.

The change is affecting markets on both sides of the Atlantic: according to eMarketer, More than 80 million consumers in the U.S. will pay for mobile apps at least once this year, representing 33.3 percent of all mobile users. In the UK, research by app developer Conjure, surveying 2,000 British adults on their app usage, habits, and perceptions, has revealed valuable insights on what consumers are expecting from the apps they are using.

Mobile smartphone and tablet usage is still growing, according to eMarketer:

Conjure’s survey, which accounted for the entirety of the UK population, revealed that:

What Do Consumers Expect From Branded Apps?

Approximately 1 in 4 consumers spent more time using branded apps on their devices in the 2014:

Just 11 percent of consumers spent less time on their devices using branded apps, and overall this is a positive signal, showing brands are improving in their ability to keep consumers engaged via apps.

Brands would do well to heed the feedback of dissatisfied consumers, those who were spending less time on branded apps: 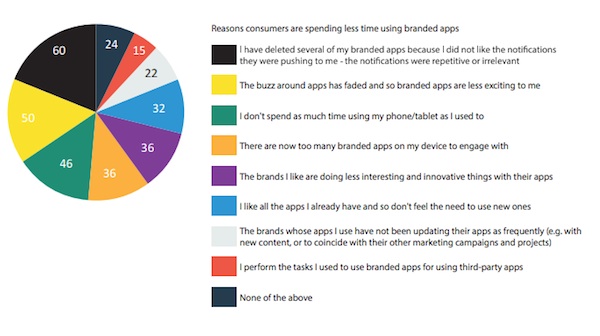 One area that has seen been developing in recent years has been in the paid/freemium models, as a means of monetizing app downloads.

“Many developers have tested the paid download model against the various iterations of the free model—namely in-app purchases, subscriptions and in-app advertising—and on the whole, they’ve found the latter approach to be more lucrative,” eMarketer reported.

It shows that app developers must continue to evolve their product to adapt to changing consumer sentiments.

With the app markets likely to continue their monumental revenue growth in 2015, these signals from users being turned of app usage should not be underestimated. Brands need to continue to improve and innovate in the app space to engender long term customer loyalty and engagement. After all, innovation is the ingredient that has been key to the meteoric growth in the app space.

“Brands still need to think about how they can take advantage of the wide range of instruments stuffed into the modern smartphone to wow their users,” according to Conjure’s report.

Is innovation key to continued revenue growth in the app markets?

The 500 leading retailers in mobile commerce will see sales of $83.78 billion by the end of 2014, according to a new forecast from Internet Retailer. Mobile sales will account for 21.2 percent of an estimated $394.71 billion in total web sales by retailers that make up Internet Retailer’s…

What will be the biggest trends in 2015 to help brands reach mobile consumers? 11 mobile marketing experts share their insights and predictions.